A lot has changed in seven years, including an explosion of rich SERP (Search Engine Results Page) features, like Featured Snippets, local packs, and video carousels. It feels like the plight of #1 is only getting worse. So, we decided to run the numbers again (over the same searches) and see if the data matches our perceptions. Is the #1 listing on Google being pushed even farther down the page?

I try to let the numbers speak for themselves, but before we dig into a lot of stats, here’s one that legitimately shocked me. In 2020, over 1,600 (16.6%) of the searches we analyzed had #1 positions that were worse than the worst-case scenario in 2013. Let’s dig into a few of these …

At 2,938px, the 2020 winner comes in at just over three times 2013’s worst-case scenario. You may have noticed that the line is slightly above the organic link. For the sake of consistency and to be able to replicate the data later, we chose to use the HTML/CSS container position. This hits about halfway between the organic link and the URL breadcrumbs (which recently moved above the link). This is a slightly more conservative measure than our 2013 study.

Before the traditional #1 organic position, we have shopping results, a research carousel, a local pack, People Also Ask results, and a top products carousel with a massive vertical footprint. This is a relentlessly commercial result. While only a portion of it is direct advertising, most of the focus of the page above the organic results is on people looking to buy a vacuum.

What about the big picture?

It’s easy — and more than a little entertaining — to cherry-pick the worst-case scenarios, so let’s look at the data across all 10,000 results. In 2013, we only looked at the #1 position, but we’ve expanded our analysis in 2020 to consider all page-one organic positions. Here’s the breakdown … 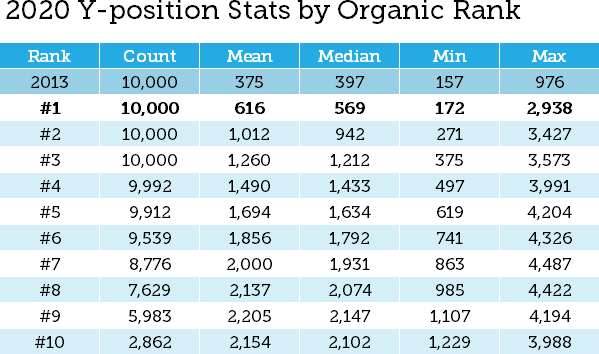 The only direct comparison to 2013 is the position #1 row, and you can see that every metric increased, some substantially. If you look at the maximum Y-position by rank, you’ll notice that it peaks around #7 and then begins to decrease. This is easier to illustrate in a chart … 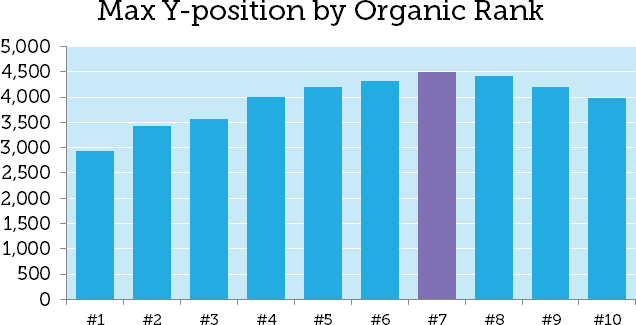 Let’s dig into that seven-result page-one bucket and look at the worst-case organic position across all of the SERPs in the study, a #7 organic ranking coming in at 4,487px …

Congratulations, you’re finally done scrolling. This SERP has seven traditional organic positions (including one with FAQ links), plus an incredible seven rich features and a full seven ads (three are below the final result). Note that this page shows the older ad and organic design, which Google is still testing, so the position is measured as just above the link.

How much do ads matter?

Since our 2013 study (in early 2016), Google removed right-hand column ads on desktop and increased the maximum number of top-left ads from three to four. One notable point about ads is that they have prime placement over both organic results and SERP features. So, how does this impact organic Y-positions? Here’s a breakdown …

Not surprisingly, the mean and median increase as ad-count increases – on average, the more ads there are, the lower the #1 organic position is. So why does the maximum Y-position of #1 decrease with ad-count? This is because SERP features are tied closely to search intent, and results with more ads tend to be more commercial. This naturally rules out other features.

For example, while 1,270 SERPs on February 12 in our 10,000-SERP data set had four ads on top, and 1,584 had featured snippets, only 16 had both (just 1% of SERPs with featured snippets). Featured snippets naturally reflect informational intent (in other words, they provide answers), whereas the presence of four ads signals strong commercial intent.

The college results are a fairly rare feature, and local packs often appear on commercial results (as anyone who wants to buy something is looking for a place to buy it). Even with four ads, though, this result comes in significantly higher than our overall worst-case #1 position. While ads certainly push down organic results, they also tend to preclude other rich SERP features.

What about featured snippets?

In early 2014, a year after our original study, Google launched featured snippets, promoted results that combine organic links with answers extracted from featured pages. For example, Google can tell you that I am both a human who works for Moz and a Dr. Pepper knock-off available at Target …

While featured snippets are technically considered organic, they can impact click-through rates (CTR) and the extracted text naturally pushes down the organic link. On the other hand, Featured Snippets tend to appear above other rich SERP features (except for ads, of course). So, what’s the worst-case scenario for a #1 result inside a featured snippet in our data set? 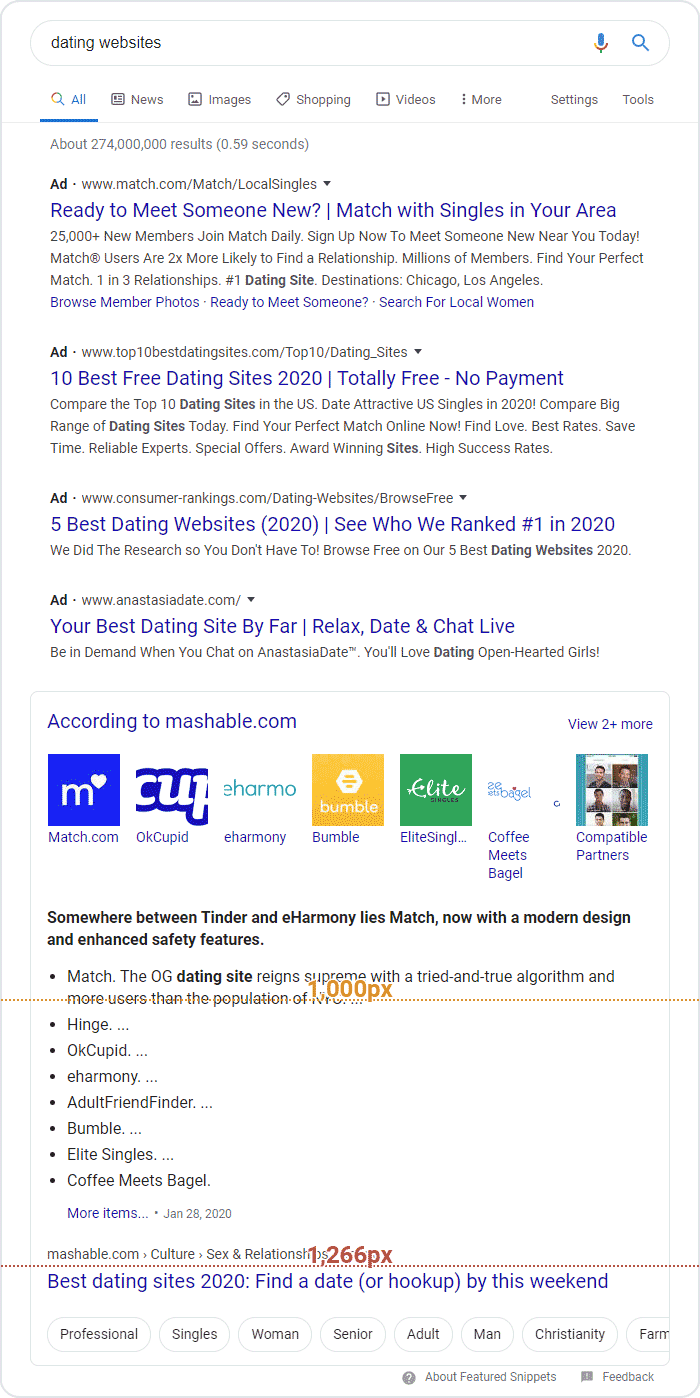 Ads are still pushing this result down, and the bullet list extracted from the page takes up a fair amount of space, but the absence of other SERP features above the featured snippet puts this in a much better position than our overall worst-case scenario. This is an interesting example, as the “According to mashable.com …” text is linked to Mashable (but not considered the #1 result), but the images are all linked to more Google searches.Overall in our study, the average Y-position of #1 results with featured snippets was 99px lower/worse (704px) than traditional #1 results (605px), suggesting a net disadvantage in most cases. In some cases, multiple SERP features can appear between the featured snippet and the #2 organic result. Here’s an example where the #1 and #2 result are 1,342px apart …

In cases like this, it’s a strategic advantage to work for the featured snippet, as there’s likely a substantial drop-off in clicks from #1 to #2. Featured snippets are going to continue to evolve, and examples like this show how critical it is to understand the entire landscape of your search results.

Another interesting case that’s evolved quite a bit since 2013 is brand searches, or as Google is more likely to call them, “dominant intent” searches. Here’s a SERP for the company Mattress Firm …

While the #1 result has solid placement, the #2 result is pushed all the way down to 2,848px. Note that the #1 position has a search box plus six full site-links below it, taking up a massive amount of real estate. Even the brand’s ad has site-links. Below #1 is a local pack, People Also Ask results, Twitter results from the brand’s account, heavily branded image results, and then a product refinement carousel (which leads to more Google searches).There are only five total, traditional organic results on this page, and they’re made up of the company’s website, the company’s Facebook page, the company’s YouTube channel, a Wikipedia page about the company, and a news article about the company’s 2018 bankruptcy filing.

This isn’t just about vertical position — unless you’re Mattress Firm, trying to compete on this search really doesn’t make much sense. They essentially own page one, and this is a situation we’re seeing more and more frequently for searches with clear dominant intent (i.e. most searchers are looking for a specific entity).

What’s a search marketer to do?

Search is changing, and change can certainly be scary. There’s no question that the SERP of 2020 is very different in some ways than the SERP of 2013, and traditional organic results are just one piece of a much larger picture. Realistically, as search marketers, we have to adapt — either that, or find a new career. I hear alpaca farming is nice.

I think there are three critical things to remember. First, the lion’s share of search traffic still comes from traditional organic results. Second, many rich features are really the evolution of vertical results, like news, videos, and images, that still have an organic component. In other words, these are results that we can potentially create content for and rank in, even if they’re not the ten blue links we traditionally think of as organic search.

Finally, it’s important to realize that many SERP features are driven by searcher intent and we need to target intent more strategically. Take the branded example above — it may be depressing that the #2 organic result is pushed down so far, but ask yourself a simple question. What’s the value of ranking for “mattress firm” if you’re not Mattress Firm? Even if you’re a direct competitor, you’re flying in the face of searchers with a very clear brand intent. Your effort is better spent on product searches, consumer questions, and other searches likely to support your own brand and sales.

If you’re the 11th person in line at the grocery checkout and the line next to you has no people, do you stand around complaining about how person #2, #7, and #9 aren’t as deserving of groceries as you are? No, you change lines. If you’re being pushed too far down the results, maybe it’s time to seek out different results where your goals and searcher goals are better aligned.

Not to get too deep in the weeds, but a couple of notes on our methodology. These results were based on a fixed set of 10,000 keywords that we track daily as part of the MozCast research project. All of the data in this study is based on page-one, Google.com, US, desktop results. While the keywords in this data set are distributed across a wide range of topics and industries, the set skews toward more competitive “head” terms. All of the data and images in this post were captured on February 12, 2020. Ironically, this blog post is over 26,000 pixels long. If you’re still reading, thank you, and may God have mercy on your soul.